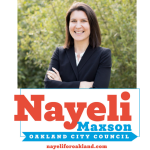 Candidate for Oakland City Council District 4 Nayeli Maxson, is a long time proponent for small  businesses and for the past four years has actively worked to help them thrive in Oakland.  As CEO of Alliance for Community Development, she has launched the Bay Area Entrepreneurship Alliance, an Oakland-based membership organization dedicated to increasing equity, access, and local leadership in the Bay Area entrepreneurship ecosystem.  Together, members economically empower underrepresented local entrepreneurs, helping them to stay in their communities and create local jobs in the process.

Calanit Kamala, District 4 business owner of  Hive, the Place to Bee, is a supporter because “Nayeli is the only candidate with the proven record of supporting small businesses and district 4 constituents. Nayeli is not interested in making headlines, she is interested in making headway to the benefit of our district.” Barbie Penn, entrepreneur and a lifelong Oakland resident, describes that “Nayeli believes in empowering others and goes the extra mile to connect them with resources to ensure that they are successful.”

As the District 4 City Councilmember, Nayeli would promote new community-rooted business structures like cooperatives, collectives and social benefit corporations with city ordinances, giving them navigational support and legal certainty. As a District 4 Policy Analyst, Nayeli helped to draft legislation to support worker cooperatives, a policy she is determined to pass as a Councilmember, if elected. Through her work in Oakland both as a District 4 Council Policy Analyst/Community Liaison and as a CEO of Alliance for Community Development, she knows where city resources and assistance can be freed up and streamlined to help businesses start and grow. Nayeli knows supporting local small businesses helps to mitigate displacement by creating economic opportunities that keep longtime Oaklanders in the communities. In addition, Nayeli works with social entrepreneurs in Oakland who are doing important, innovative work to house and provide credit building opportunities for the unhoused. Supporting local small businesses and social enterprises grows knowledge, wealth and capability close to home, making Oakland more resilient and ensuring a healthy tax base for public services.

Nayeli has the support of numerous local entrepreneurs, businesses and business development leaders including:

Kathleen Caldwell, owner of A Great Good Place for Books in Montclair

Bree Dezort and Calanit Kamala, owners of Hive, the Place to Bee