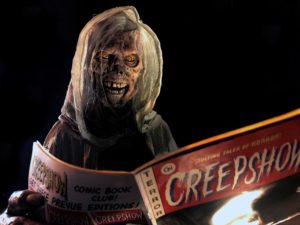 Stephen King is everywhere these days and the world better keep being prepared for more of that to happen with upcoming feature films like Doctor Sleep and the Netflix only film release of his collaboration with son Joe Hill, In The Tall Grass.

But there’s another entry into the Stephen King zeitgeist that will be starting on Shudder, the horror streaming service, later this month.  September 26th will see the resurrection of the George Romero and King collaboration Creepshow as an anthology series, with weekly episode releases.  The brainchild and passion project of Greg Nicotero, Creepshow continues what Romero and King started back in the 80’s with the motion picture of the same name.

Creepshow collects short stories in the vein (some would say the severed vein) of the old EC horror comics of the past.  Nicotero starts off the series with one of King’s most disturbing short stories, Gray Matter and partners it with the Josh Malerman short, The House of the Head.

I was lucky enough to watch the premiere episode and reviewed it.  Read the full review here and prepare for the scare on September 26th when Shudder opens up the pages of Creepshow.

See other Oakland News Now posts on sci-fi entertainment, like this one on Lost In Space on Netflix.

Where Do The Atlanta Falcons Go From Here? – Dave Squires

London Calling: A Permanent NFL Team In The UK Still Has More Questions Than Answers

(Last Updated On: January 23, 2020)Taipei – In order to pave the way for Taiwan’s startups to enter international market, the “Ministry of Science and Technology (MOST)” organizes a delegation…

Mohammed Nuru: Publicist Lee Houskeeper May Be At

To find out what @courtneystoddenofficials is up t

Congratulations to @leighsteinberg on his client P

This Super Bowl Half Time Show comes with a PG-13

My dear friend Beth Schnitzer sent this from Super

Cool to see JT and Bonin Bough at Leigh Steinberg

Having a ball on Miami South Beach for Super Bowl

‪Jamie Foxx in the house at Culinary Kickoff Sup

‪Jamie Foxx in the house at Culinary Kickoff Sup

At The Guitar Hotel for Culinary Kickoff for Super